The 27th Exposition of construction and finishing materials MosBuild also featured the Xth Anniversary DIY Forum. The key subject of the Forum in 2022 was “Market of Construction and Finishing Materials and DIY Trade – New Era and New Reality”. More than 20 speakers and 300 delegates, top managers and specialists of DIY networks, manufacturers of do-it-yourself construction and finishing materials and products took part in the Forum. The Forum was arranged by the MosBuild Expo and the INFOLine Analytical Agency. The Unitile Group of Companies served as the general partner of the Forum. Cersanit and ARCHITILE were the official partners.

The INFOLine Director Ivan Fedyakov noted that the DIY market has been actively developing in the recent past. In general, it has grown almost 4 times in the past 15 years, and in 2021, the market reached its best performance indicators in terms of sales growth (almost 19%). ‘This was a cause for gigantic optimism. We saw how the demand for construction products was growing, how actively the private housing construction sector was developing. No one expected what came next. And today it is very important to discuss the prospects our market will be facing in the near future’, the expert said.

One of the key events of the Forum was the plenary discussion involving DIY networks top managers, which raised the most relevant issues in today’s DIY operation, relationships with suppliers, the DIY category growth, etc. 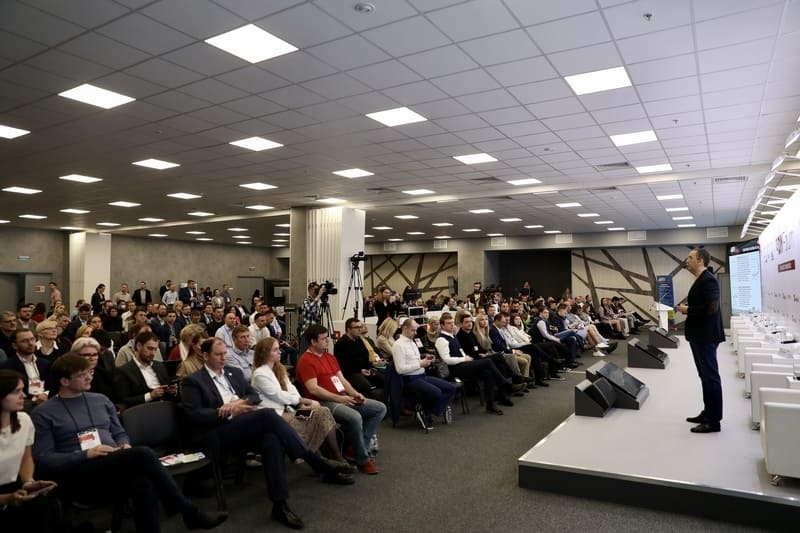 Evgeny Movchan, the Director General of “Petrovich” Construction Trading House, stated that his company did not introduce any changes in the relationships with all its partners: ‘We do not want to go down this spiral, which could eventually affect everyone’, he said. Yuri Ksenafontov, the Commercial Director of Baucenter, said that in Kaliningrad, where the network is headquartered, virtually all rail and road deliveries were blocked at the time: ‘In this situation, we conduct successful negotiations with our partners and look for ways of resolution of these problems. I am very grateful to them, because in this moment it shows that we are truly united with our partners’. Vladimir Guryev, the President of “Vimos” Trading House, believes that the most important thing for now is ‘not to fuss, not to give in to panic, and keep on working hard every single day’.

Viktor Kuznetsov, the Director General and founder of “VseInstrumenty” (“AllTools”) company, noted that in March the company, as many other players on the market, benefited from hysterical demand, but after a few turbulent days decided on the strategy summed up by “No Sudden Movements” motto. Anna Karpova, OZON Business Development Director, stated that the DIY category has grown triple and has become one of the fastest growing sectors in the marketplace. The first place in the rating of growing DIY categories is held by plumbing products. Evgeny Kvasov, the Head of Wildberries DIY category, said that the data showed that Wildberries sales of home improvement and finishing products had been growing rapidly in the past few years, and in 2021 the sales growth amounted to 284% compared to previous year. 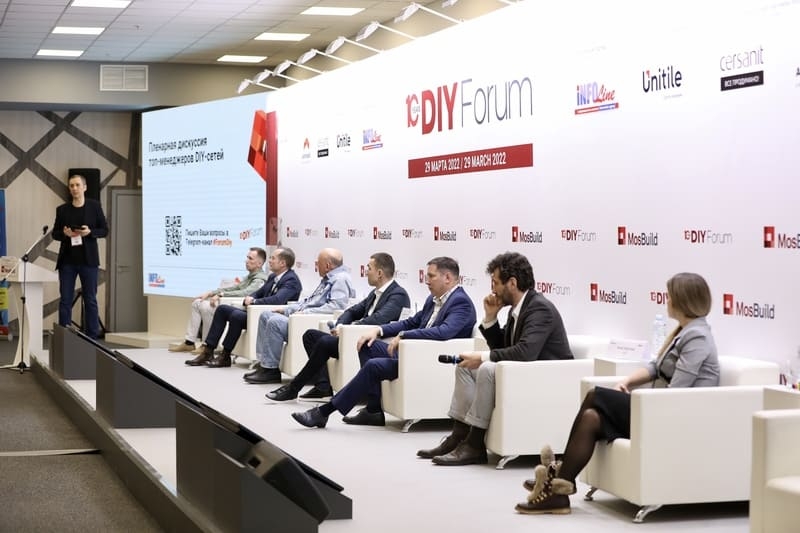 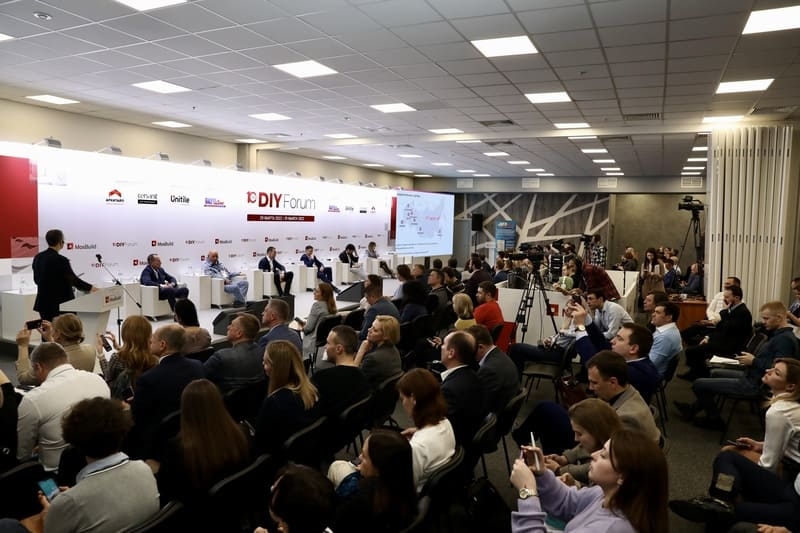 In a session featuring leading material suppliers and manufacturers, the participants discussed relationships with partners, changes to production processes and anti-crisis measures.

Denis Telyukov, the Commercial Director of Knauf Insulation, noted that the company has no plans to change its vector of development in Russia. ‘A strong retail system can only function with support of strong suppliers with their feet planted firmly on the ground’, he said. Yuri Kovtun, the Director General of Cersanit in Russia, emphasized the difficulties the company and the industry as a whole were facing: ‘It is a difficult task for all ceramics manufacturers now – to ensure the continuity of production, because a suspension will have serious systemic consequences’. Evgeny Abrin, the Director General of Kiilto Russia, touched on the issue of raw materials localization: ‘There is a possibility to localize at least 70% of chemical industry products. But the capabilities of our manufacturers are not endless, because time and investments are required for expansion of production facilities’.

Talking about anti-crisis measures, Andrey Krivosheev, the Robert Bosh Company Sales and Marketing Director for Russia, noted that in the current situation all market players had to emphasize their key competencies: ‘Manufacturers must focus on continuation of operating activity and preservation of jobs’. Tarkett Development Director Tatyana Kuznetsova thinks that availability of consistent range of goods that can be sold quickly is critical for current situation: ‘We have to make offers on our products in different price segments. The only thing we are postponing now is the launch of any new products’. 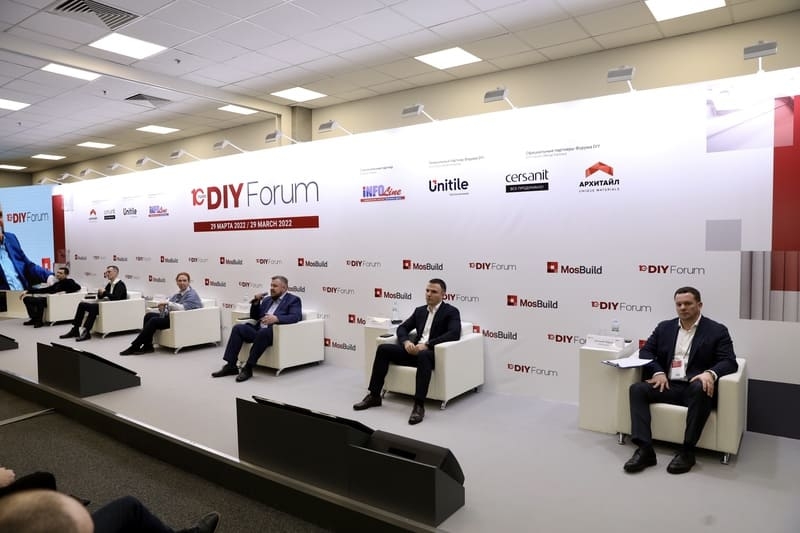 The Xth Anniversary DIY Forum program ended with the “Market of Construction and Improvement Services” discussion. Svetlana Filimonova, the Head of “Repair and Construction” Category at Avito.Service, stated that the service audience in that category includes about 6.5 million people: ‘People are looking for contractors not only in metropolitan cities, but in smaller settlements as well’. Igor Kolynin, the Marketing General of “Petrovich” Construction Trading House, took part in the discussion and stated that about 70% of population are and will be inclined to make home renovations themselves.

Konstantin Fedorov, the co-founder of “Ruki’ (“Hands”) service, speaking about retail sales of manufacturers, said that those would be more successful if accompanied by services. Viktoria Chernysheva, the representative of Remontnik.ru, said that 32% of employees providing the ‘Do It for Me’ service did not have a vocational education, but 58% were interested in improving their qualification and skills. 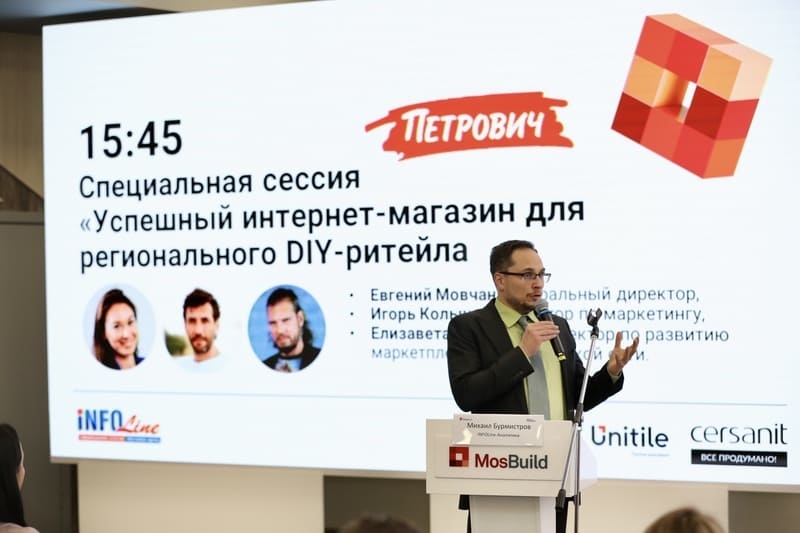 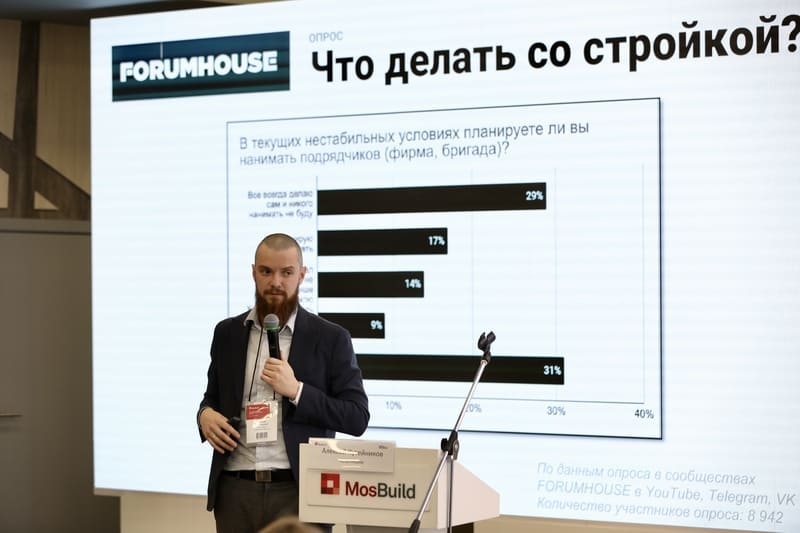 In uncertain environment, personal meetings and an opportunity to share winning strategies are especially important. Vladimir Gordeev, the Commercial Director of the Unitile Group of Companies, highlighted that the MosBuild Exposition and DIY Forum were unique platforms for live interaction and identification of global ideas which can be subsequently applied by many market players.